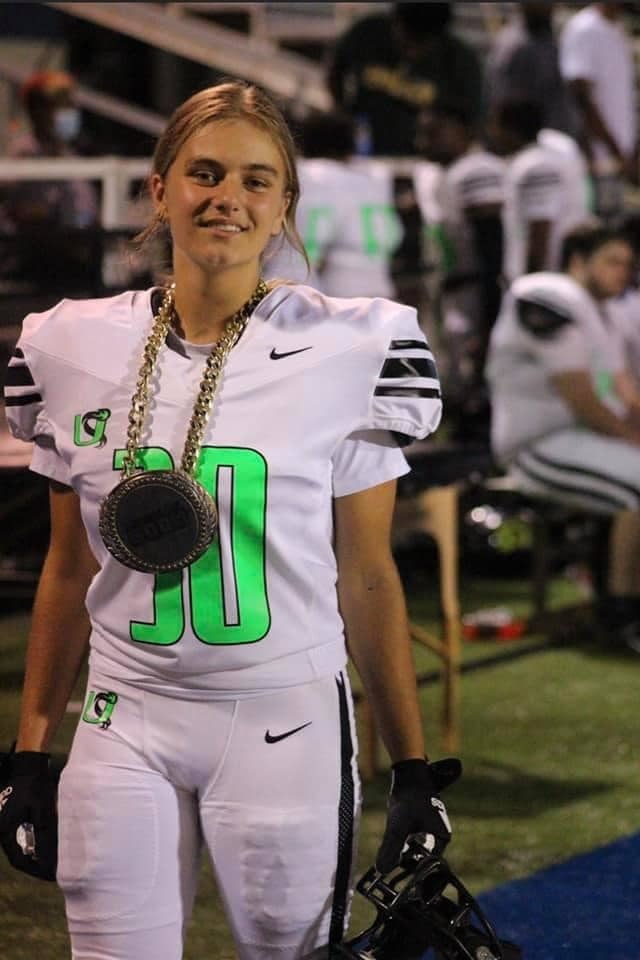 When Jasmin Vogel signed up to study abroad in the United States in September 2020, she didn't know where she'd be placed or what she would be studying.

But Vogel did know one thing -- she wanted to play American football.

Since Vogel, a native of Huttwil, Switzerland, arrived in Little Rock this summer, she's taken it upon herself to get involved with football, seeking out the coaching staff at Mills High School for a chance to play a sport that's completely new to her.

"I like her attitude," Mills Coach Cortez Lee said. "Her drive and her energy, it's second to none. She really wants to be out there. Most people, they just want to come out here and relax and just be a part of something. They kind of sit back in the wind and lay low, but she doesn't do that."

Growing up in Switzerland, Vogel competed in several sports, including gymnastics, soccer and martial arts, but coming picking up football has meant a semester of learning both on and off the field. At first, Lee said, that largely meant introducing Vogel to the nuances, schemes and physicality of the sport. But as the season has progressed, he's seen significant improvement in her.

Vogel, who's playing wide receiver for the Comets, has put in her share of extra time to learn her position. She said she'll frequently stay after practice to work on route running, catching passes with teammates or lifting alongside them in the weight room.

While the challenge of learning a new sport hasn't been hard for Vogel to tackle, the notion of being a girl in a sport that is predominantly played by boys isn't something that's been daunting to her, either. She said growing up with four brothers was a large part of the reason she told Lee and her coaches that she'd rather play receiver, running back or linebacker than any other position.

"It was just how I grew up," Vogel said. "[We] always had that tackling stuff and rough stuff with each other and I kind of miss that here."

Vogel said she was comfortable around her teammates from early on, too, and that, while there were some who were surprised with her decision to play, it was never an issue. It's also clear that she's made an impact on her teammates.

"If you need to talk to somebody, she'll be a person to talk to," Presley Holt, a teammate and senior at Mills said about Vogel. "She's brave and she's just a good person to be around."

According to Lee, the Mills football team also got to see Vogel take part in homecoming court festivities and cheered her on as she took part at the crowning ceremony of that week's game.

"They really pull for her," Lee said. "They look up to her to a degree."